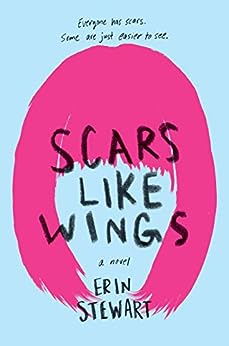 Ava Lee has lost her parents, her home, her best friend, and even her face in a moment's notice. She doesn't need to look in a mirror to know how she looks like because she sees it in the eyes of everyone around her. After nearly a year after the fire,  her aunt and uncle decide that she should go back to high school. They want her to have a "normal" life being surrounded by other people instead of feeling isolated.

However, Ava feels that life will never feel normal for her again. And she could forget about making friends because no one wants to be seen with the Burned Girl. Things change when Ava meets another survivor named Piper. She begins to feel that she doesn't have to face the nightmare alone anymore. Piper likes to push Ava outside of her comfort zone and even introduces her to Asad, a boy who loves the theater just as much as she does. Slowly, Ava starts to feel connected to life again but, when Piper starts to struggle, will Ava be able to step up to the challenge?

I thought this novel was a great and a emotional read. The characters were all well developed and likable. I love how each of the characters helped each other grow and become better versions of themselves.  The novel is an endearing read of someone facing psychological issues after a traumatizing event while finding herself again.

**Disclosure - I received a free copy of this book in exchange for an honest opinion. **

Relatable, heartbreaking, and real, this is a story of resilience--the perfect novel for readers of powerful contemporary fiction like Girl in Pieces and Every Last Word.

Before, I was a million things. Now I'm only one. The Burned Girl.

Ava Lee has lost everything there is to lose: Her parents. Her best friend. Her home. Even her face. She doesn't need a mirror to know what she looks like--she can see her reflection in the eyes of everyone around her.

A year after the fire that destroyed her world, her aunt and uncle have decided she should go back to high school. Be "normal" again. Whatever that is. Ava knows better. There is no normal for someone like her. And forget making friends--no one wants to be seen with the Burned Girl, now or ever.

But when Ava meets a fellow survivor named Piper, she begins to feel like maybe she doesn't have to face the nightmare alone. Sarcastic and blunt, Piper isn't afraid to push Ava out of her comfort zone. Piper introduces Ava to Asad, a boy who loves theater just as much as she does, and slowly, Ava tries to create a life again. Yet Piper is fighting her own battle, and soon Ava must decide if she's going to fade back into her scars . . . or let the people by her side help her fly.

"A heartfelt and unflinching look at the reality of being a burn survivor and at the scars we all carry. This book is for everyone, burned or not, who has ever searched for a light in the darkness." --Stephanie Nielson, New York Times bestselling author of Heaven Is Here and a burn survivor

About Erin:
Erin Stewart is the author of SCARS LIKE WINGS, her debut novel. Erin is a graduate of the Medill School of Journalism at Northwestern and a BYU undergraduate who works as a freelance writer and editor, as well as a weekly columnist in Salt Lake City.
Erin lives in Utah with her husband and three children. She is represented by the amazing Brianne Johnson of Writers House.

Giveaway Details:
3 winners will receive a finished copy of SCARS LIKE WINGS, US Only.