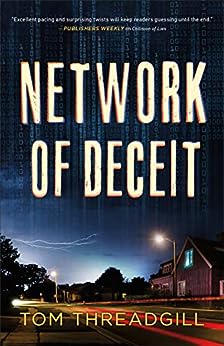 After Amara Alvarez rescues nearly fifty kidnapped children, she finally lands her dream assignment. She is transferred to the San Antonio's Homicide Division. Amara receives her first case of a suspicious death of a teenager at a local water park.

As Amara investigates the case, she notices as she applies pressure to her suspects she bring more chaos to her personal life.  Someone is watching her entire move and is stalking her online. Amara will have to trust her intuition and use unconventional methods to find the killer. She will need to prove herself that her first case won't end up in the cold case files.

This is the second book in the series and the first book I read. I was able to follow along and understand the story but, I felt like there were some character nuances that I missed. The book mentioned several times the case that Amara worked on previously. I enjoyed the story but, I had a hard time liking Amara. I felt like she was a bull in a china shop and had no chill.  I am looking forward to the next book in the series especially, the drama with her new partner.