Book Review - The Other People by C.J. Tudor 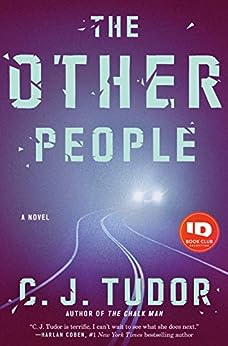 Gabe is driving home one night and he is stuck behind a rusty old car. As he stares ahead willing traffic to move faster, he sees a little girl's face appear in the car's rear window. The girl mouths "daddy" to him. He realizes it's his five-year-old daughter, Izzy. After their faithful momentary meeting, Gabe never sees his daughter again.

Three years later, Gabe spends his days and night going up and down the highway searching for his daughter. He refuses to give up hope because that would mean admitting that his daughter is dead. He receives help from an unlikely ally and discovers the car he last saw his daughter in. The car was found abandoned with a body inside. Gabe must come to terms with the day Izzy disappeared and his past.

Fran and her daughter, Alice also spends a lot of time on the road. Unlike Gabe, they are running from people who want to hurt them. It's because Fran knows the truth behind Izzy's disappearance. She knows that if they catch her, they might not make it out alive.

I thought the novel was an interesting read. I wish the author gave more details about certain things and characters. I didn't really care for some of the supernatural bits of the story. While the story took a bit to get going, I found the book to be an enjoyable read.

**Disclosure -  This post may contain affiliate links which means I earn advertising and/or referral fees if you purchase an item through my link. Please note, there will be no extra charges to you. Thank you for your support.**