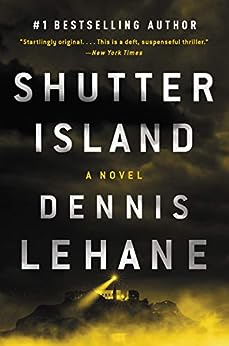 In 1954, two U.S. Marshals have been assigned to find a missing patient at Ashecliffe Hospital for the Criminally Insane on Shutter Island. Teddy Daniels and his new partner, Chuck Aule, were asked to locate a woman named Rachel Solando, who has murdered her children. Rachel has managed to escape her locked cell even though she is under constant surveillance.

A deadly hurricane hits the island and causes the entire island to erupt into chaos. As Teddy and Chuck investigate the disappearance, they find clues of radical experimentation, patients being operated on, and strategies on how to win the covert shadow war. Teddy realizes nothing is what it seems like and that he will need to think ahead if he wants to leave the island alive.

I haven't seen the movie so, this book was new to me. I was able to guess where the book was going but, I wasn't fond of the ending. I thought the writing style was a bit choppy at times. I thought at times the novel stalled and the story went no where. However, I am still open to reading other books  by the author.