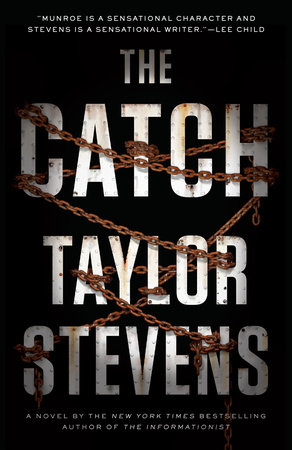 As a newcomer to the series, this is the latest book in the Vanessa Michael Munroe series.  I wasn't sure what to expect especially with all of the fanfare from the other books. Thankfully, each of the novels are self contained and don't have to be read in a certain order unless you care about character development. With the mind of a goldfish, this didn't bother me.

The novel takes place in Djibouti, Africa where Munroe runs to escapes her past. But since when does running every take someone away from the drama? As expected, as Munroe runs from her past it catches up to her. She boards a freighter (albeit against her will) in the hopes that it would be a regular security detail but things are not always what they appear. They are shortly invaded by pirates and the ship is captured. She narrowly escapes but manages to bring the captain with her and will prove to be an important piece to the puzzle. While death is following Munroe she does her best to figure out all the pieces of the puzzle .

A deeply engrossing novel that had me captivated for the three days it took me to consume it. However, I felt the character and story line was a bit lackluster and predictable. I wanted more and this novel left me craving it. I was also confused on why Munroe risked her life many times over people that didn't seem to care or worry about her. At times, I didn't even think Munroe liked them but I sense that her bloodthirsty nature is probably what makes her seek the violence her body craves but her heart doesn't want. I would read the other Munroe novels hoping this one is the anomaly instead of the norm.

**I received a free copy of this book for my honest opinion. This is no way affect my overall review of the book**
Posted by Two Points of Interest at 8:51 AM