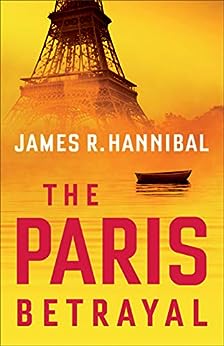 Company spy Ben Calix had a mission go wrong in Rome and when he returns to Paris, he finds his entire world turned upside down. He was targeted in an ambush and a sniper is after him. He tries to get in contact with his agency and was told that they are severing their ties with him and French SWAT is after him.

Ben is desperate for answers and he is trying to avoid a biochemical attack from happening. As he tries to escape, he unwittingly causes another civilian to end up in the Company's cross hairs. He decides to travel across Europe to connect with former team members to help him stop the attack. While Ben is looking for a plan, he will also deal with the fallout from being kicked out of the Company.

I thought the novel was a quick and fast paced read. I can't say that I care for any of the characters or what happened to them because there were a lot of characters involved. I felt that the novel was a bit too predictable and I was able to guess all the twists before they were disclosed. The book was an okay read and I would be open to reading other books by the author.