Katherine Levinson put her life on hold while taking care of her sick mother after her father dies. She and her mother face eviction if they can't pay rent. After all other sources of income dry up, she has no choice but, to reach out to estrange wealthy brother, Rhyan Cason. However, her ill mother refuses to contact Rhyan.

When Katherine and her mother move to the cattle ranch, Sollano, they are met with whispers and scorn. Katherine learns of her parents' buried past and secrets are revealed. With Rhyan being busy with cattle rustlers, Katherine turns to Colt Holliman, a calm neighboring rancher, for comfort. However, Colt is promised to another woman, Charley Ryder but, he feels drawn to Katherine. Will Colt be able to follow his heart? What secrets are buried in Katherine's past?

I found the novel to be a good read. I like the parts with Charley performing stunts and portraying her as a strong female character. I enjoyed that there wasn't a lot of deny of each other's feelings. Such as, "Oh, she's not good enough" or "He's a bad boy" back and forth. I haven't read the other stories in the series but, I found this still to be an enjoyable read.


Nothing can be hidden that won’t be revealed.
When her father dies, Katherine Levinson discovers her parents have kept secrets that render her happy childhood a farce. She and her gravely ill mother face eviction, and she has no choice but to appeal to the brother she’s never seen, the famous cattle baron, Rhyan Cason. Over her gravely ill mother’s objections, they move to Nebraska and the sprawling cattle ranch, Sollano.

Instead of the warm welcome Katherine expects, she and her mother are met with whispers and scorn in the little prairie town near Sollano. Gradually, the sins of her parents’ past surface, and Katherine begins to doubt her very identify. With her brother busy with cattle rustlers and her mother too ill to be bothered, Katherine turns to Colt Holliman, a soft-spoken neighboring rancher, for comfort.

Tired of waiting for the right woman to come along, Colt has promised to wait for Charley Ryder, an acclaimed female sharp shooter and equestrian acrobat with the Wild West Show, but it’s becoming clear Charley loves the show more than him. As his attraction to Katherine grows, he finds himself spiritually conflicted. How can he break from past commitments and follow his heart?

Then unexpected danger strikes, testing Katherine’s and Colt’s faith in God—and each other. 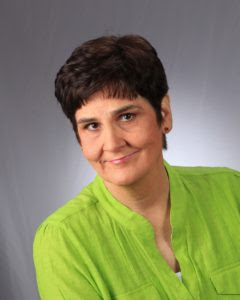 Elaine Manders writes wholesome Christian romance and suspense about the bold, capable women of history and the strong, dependable men who love them. Her stories twist, turn, and surprise, told by characters who aren’t afraid to show their love for God and each other. She grew up a small town country girl and now lives in Central Georgia with her fur baby. Besides writing, she enjoys reading, sewing, crafts, and spending time with her family.

To celebrate her tour, Elaine is giving away a grand prize of a $50 Amazon gift card!!
Click below to enter. Be sure to comment on this post before you enter to claim 9 extra entries!

Posted by Two Points of Interest at 8:39 AM