In Scorpion, the sequel to Jeff Sweat's YA futuristic thriller Mayfly, Jemma, Lady, and Pico all left the Holy Wood to seek answers to the End, and when they find the Old Guys—the only adults to have survived the original wipeout of everyone over the age of seventeen—they think they've found help at last.

But there's a lot the Old Guys aren't telling them. In fact, some of them don't seem interested in solving the End at all and just want Jemma and her friends to leave. Meanwhile, war is brewing among the tribes of the rest of the Children. Jemma's old home has fallen into disorder, and is far from prepared for battle. It won't be long before the fighting reaches Jemma and the Old Guys, if they even live to see it. 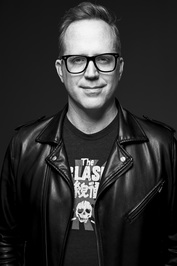 About Jeff:
Jeff Sweat has made a living from words his entire career, starting out as an award-winning tech journalist for InformationWeek magazine and moving into marketing.

He led the content marketing team for Yahoo and pioneered its use of social media. He directed PR for two of the top advertising agencies in the country, Deutsch LA and 72andSunny. He now runs his own Los Angeles–based PR and marketing agency, Mister Sweat.

He grew up in Idaho as the middle of eight children—seven boys and one girl—and attended Columbia University in New York. Jeff lives in a big blue house in Los Angeles with his wife Sunny and their three kids, two cats, and a racing greyhound.

He loves to travel and writes everywhere he goes, even when there's not a desk. He likes karaoke, motorcycles and carpentry. He was once shot in the head with a nail gun, which was not a big of a deal as it sounds. But it still hurt like crazy.