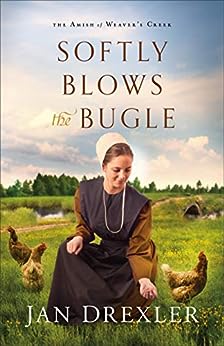 In 1863, Elizabeth Kaufman's husband perishes in the Battle of Vicksburg. Instead of feeling sad over his death, she is relieved. She is determined to never let a man control her life again, even if it means she will never have a family of her own.

Aaron Zook joins Elizabeth's brother, Jonas in his journey home. He wants to move the West and restart his life because his past is too painful. He never imagined that the Amish way of life would be appealing as his grandfather left the faith years ago. However, as Aaron spends more time with Elizabeth and Jonas, he finds the Amish ways enticing.  Aaron is stuck between moving to the West and starting a new life with the Amish.

The book was a quick and easy read. I thought Elizabeth to be an annoying character. She claims that she doesn't want to settle down and is content by herself. However, when Solomon throws a bit of interest at her she fawns over him. She feels uncertain about him and her gut is telling her that he is a bad guy. And several people are telling her the same thing but, she still refuses to believe them. When she meets a guy who does care for her and put her interest first, she gives him harsh words even when he was looking out for her. She claims that she doesn't want to beholden to any man who is cruel or mean but, she does the exact opposite. Except for Elizabeth, I thought the rest of the book was an interesting read.