A long time ago, dragons once rule the lands and there was heavy demand for brave dragonslayers. However, the dragons have long died out and the need for dragonslayers died with them.  Guillot dal Villevauvais was once an illustrious famous knight of the King's personal guard and now, he a drunken disgrace.

When a quest to look forgotten power awakes a dragon, Gill is called upon to help slay the dragon.  He is astonished and worried when he called upon by Prince Bishop to kill the dragon  He is no longer the heroic person and must call upon his past experience to help guide him.

On his way to the Capital, Gill comes across a young barmaid, Solene who is about to be burned as a witch by an angry mob. He had seen enough innocent people being punished wrongly and decides to save her. He soon discovers that Solene is a powerful mage but lacks experience and control. However, magic is considered to be forbidden but, Prince Bishop believes magic will help destroy the dragon and better the lives of the people. Together will Gill and Solene be able to defeat the dragon?

I love reading the "Lord of the Rings" novels. While this book has elements of a great fantasy novel, I felt like something was missing.  felt like there was a lack of explaining the world the characters lived in. There was no story behind the different cities and villages that would have helped add to the story. I did enjoy that the novel included the perspective of both the dragon and the human characters.  The novel did include a lot of gore, sword fighting, and adventure but, overall the novel wasn't for me.


**Disclosure - I received a free unedited copy of this book in exchange for an honest opinion. This post may contain affiliate links which means I earn advertising and/or referral fees if you purchase an item through my link. Please note, there will be no extra charges to you. Thank you for your support.**

Author of one of BuzzFeed 's Greatest Fantasy Books of 2013

Do you have what it takes to be a Dragonslayer? In this epic, adventure fantasy series, an unlikely hero, Guillot dal Villevauvais, must overcome his disgraced past as a failed member of the King’s guard and hunt down a ferocious beast thought long extinct. A dangerous quest, led by the swordsmanship of Gill, the magical powers of Solène, a barmaid nearly burned to the stake, and the goodness of Prince Bishop. From the critically acclaim fantasy author Duncan M. Hamilton, this fast-moving series is a must-read for fans of epic, sword-and-sorcery adventures. 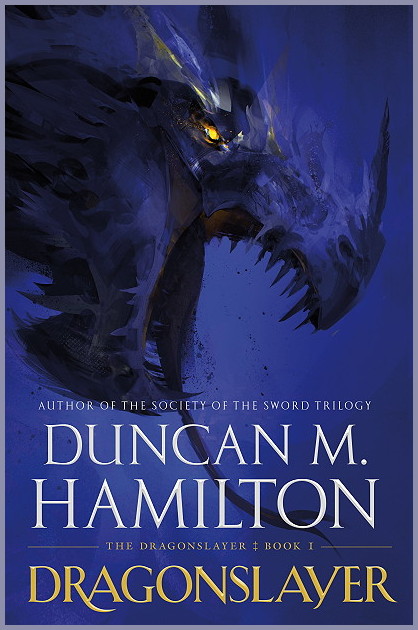 Once a member of the King's personal guard, Guillot dal Villevauvais spends most days drinking and mourning his wife and child. He’s astonished—and wary—when the Prince Bishop orders him to find and destroy a dragon. He and the Prince Bishop have never exactly been friends and Gill left the capital in disgrace five years ago. So why him? And, more importantly, how is there a dragon to fight when the beasts were hunted to extinction centuries ago by the ancient Chevaliers of the Silver Circle?

On the way to the capitol city, Gill rescues Solène, a young barmaid, who is about to be burned as a witch. He believes her innocent…but she soon proves that she has plenty of raw, untrained power, a problem in this land, where magic is forbidden. Yet the Prince Bishop believes magic will be the key to both destroying the dragon and replacingthe young, untried King he pretends to serve with a more pliable figurehead.
Between Gill’s rusty swordsmanship and Solene’s unstable magic, what could go wrong?

You can purchase Dragonslayer at the following Retailers: 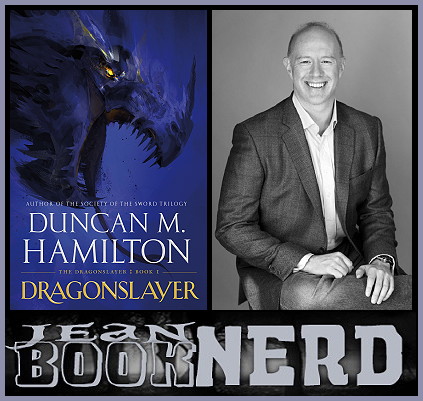 
Duncan M. Hamilton is the Amazon best selling writer of fantasy novels and short stories, including The Wolf of the North and the Society of the Sword trilogy. He has Master’s Degrees in History and Law, and practised as a barrister before writing full time. Duncan is particularly interested in the Medieval and Renaissance periods, from which he draws inspiration for his stories.

He lives in Ireland, near the sea, and when not writing he enjoys sailing, scuba diving, windsurfing, cycling, and skiing.

His debut novel, ‘The Tattered Banner (Society of the Sword Volume 1)’ was featured on Buzzfeed’s 12 Greatest Fantasy Books Of The Year, 2013.

Duncan is a member of The Society of Authors, and the Science Fiction and Fantasy Writers of America (SFWA). He is represented by DongWon Song of Howard Morhaim Literary.