Book Review - The Year of the Witching by Alexis Henderson 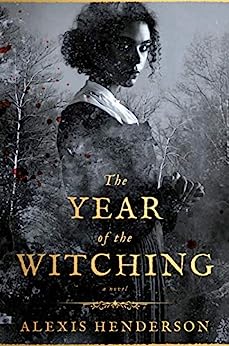 Immanuelle Moore is living in Bethel where the Prophet's word is the law. Her very existence is blasphemy. Her mother had an affair with an outsider of a different race. For her mother's sins, her entire family was cast out in disgrace. Immanuelle tries to atone for her mother's disgrace by trying to worship the Father and follow all the rules as the other women in the settlement.

Growing up, Immanuelle has heard stories about the Darkwood forest. Settlers are forbidden from entering the forest. The forest is where the first prophet chased and killed four powerful witches. When returning home from the market, an accident occurs which causes Immanuelle to enter the Darkwood forest. She comes across two of the witches and they give her a gift. When Immanuelle opens the gift, she realizes it's her dead mother's journal. She finds out that her mother once sought sanctuary in the woods.

Immanuelle knows that having the journal is forbidden but, she is fascinated with the secrets that are buried in the pages. She is struggling to understand how her mother could go against her faith and conspire with the witches. As she tries to dig deeper into the journal, she learns the truth behind the Church and its history along with the secrets it keeps.

The novel is an interesting read. I thought it was interesting reading the description of the witches. However, I was expecting a bit more from the novel. The secrets that the church has is more about human greed than a secret scandal. I felt like the story followed most storylines about cults where men are fearless leaders and women are stripped of most of their rights. Then one woman will try to stand up to the leaders but, the "faithful followers" will go against her but, she will do the right thing anyway. I was confused by the role of witchcraft. It seems like some of the other "darker-skinned" people worshiped the witches but, the witches seem to be evil people hurt whoever gets in their way. I thought when Immanuelle saw the marks on the witches' faces are similar to the Prophet's wives, the story was going to take a different turn but, it didn't.  The story had potential but, failed to live up to it. Also, can we stop making people who look different especially people of dark skin color villains by the story characters?

**Disclosure -  This post may contain affiliate links which means I earn advertising and/or referral fees if you purchase an item through my link. Please note, there will be no extra charges to you. Thank you for your support.**