Book Review - The Widow of Pale Harbor by Hester Fox 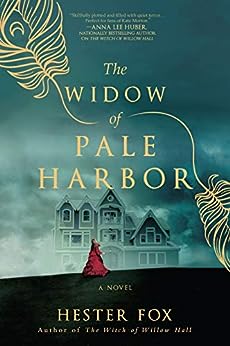 In 1846, Gabriel Stone is desperate for a fresh start. He decides to move to Maine to escape the ghost of his past that haunts him in Massachusetts. After the death of his wife, he decides to take the position of a minister in the remote town of Pale Harbor.

When Gabriel arrives,  the town isn't as quiet as he thought. There are strange and unsettling things that started happening when Gabriel arrives. The townspeople are certain that Sophronia Carver, a reclusive widow, is responsible for all the heinous acts. Sophronia lives with her spinster maid, Helen, at Castle Carver. The townspeople believe that she is a witch because she reportedly killed her husband.

The incidents start to escalate from benign creepy to dangerous acts of violence. It becomes clear to Sophronia and Gabriel that the person is copying the stories of  Edgar Allan Poe. The pair realize they must work quickly to find the culprit otherwise, there might be more bloodshed.

I thought the novel was an interesting read. I thought the main characters would be spending more time figuring out who the culprit was. Instead, they spent most of the time pining for each other. I thought the novel was going to be a murder mystery and not heavy on romance.  I found some of the characters and their actions questioning. For example, Gabriel coming to Pale Harbor to honor his wife. However, he makes such a lame attempt to be a proper minister. Or Sophronia claiming Helen is like a doting mother or sister figure but, barely knows the woman or her past. Then there are times that Helen is openly defiant to Sophronia and acts like she is the mistress of the house. The story moved a bit slower than I would have liked but, I found enjoyed the mystery portion of the book.