Book Review - We Thought We Knew You by M. William Phelps 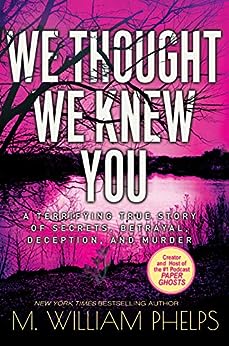 It was July 2015 and it was an ordinary day for Mary Yoder and her husband, Bill. Mary had returned home from their chiropractic center and was felling unwell. Mary was known for being very health-conscious but, today she was suddenly unwell with bouts of vomiting and sweating along with feeling very weak.

Bill took Mary to the ER to help diagnose her illness. However, the doctors in the ER and ICU were baffled by the cause of her rapidly progressing illness. Bill and their children gathered around Mary in shock as they say goodbye to their beloved mother.

In the weeks after Mary's sudden death, the family received startling news from the medical examiner that Mary was deliberately poisoned. They found trace amounts of colchicine, which is a lethal substance that is very toxic if it isn't used as prescribed. The chemical is typically used to treat gout and Mary doesn't have gout.  The case takes a strange turn when the local police department receives an anonymous letter that claims Adam Yoder had poisoned his mother.

Kaitlyn Conley is Adam's ex-girlfriend and she works at the Yoders' clinic. Katie is pretty and popular but, some people speak of her ability to lie and manipulate people for her own benefit. She has been known to exhibit behaviors fueled by rage because someone had rejected her. Katie had spent time by Mary's bedside during the last few hours of Mary's life.

This was my second true crime novel and it was an interesting read. I liked that the author include the backstory and the trial proceedings. I wasn't fond of the layout of the book. I felt that some of the same information was being told multiple times and it felt like the author was jumping around a few times. However, the author  did a good job showing the compelling evidence of the murder of Mary along with showcasing Mary as beacon of the community.