Clod is a magnet for bullies because he is different than his classmates. He is bigger, clumsy and ugly along with having no magic. In a world where magic makes everything possible, Clod has no friends and has trouble getting along with other people.

Clod lives with his mother, Eidy in a small cottage where they barely have enough to survive.  One day after a visit from his teacher, Learned Yugen about an incident at school, Clod is more discouraged than ever. He takes to building a friend out of clay that his mother brings for him every day. One day, the clay girl, Ada comes to life and becomes friends with Clod but her confidence and courage get them both in trouble. Is Ada the friend Clod desperately needs?

The novel was a quick and fun read especially with the dynamics between Ada and Clod. There were portions of the book where I thought the sassy Ada would become another bully for Clod but I was happy when it turns out that they both needed each other. While I did enjoy the book, I wish the author went into a bit more details especially about the dark war and Clod's family. Overall, it was a fun treat to read and I look forward to reading other books by the author.

Bullies love to hate Clod. Not just because he’s bigger, clumsier, and uglier than his classmates - he’s also the only student in his school without magic. In a world where all magic is possible and everyone else is born with great gifts to do amazing things, Clod is alone.

Living with his mum in a broken-down cottage on barely enough, the only thing Clod has to play with is the clay she occasionally brings him. Bleak is an understatement. More than anything, Clod wants a friend. The only way that’s going to happen, is to make one himself.

After an angry visit from the worst of the bullies, his teacher Learned Yugen, Clod’s clay sculpture of a little girl comes to life and introduces herself as Ada. For a clay girl barely the size of his hand, she has more confidence and courage than he knows what to do with. Every adventure she leads him on gets Clod into trouble. She may be the friend he wants, but is she the friend he needs?

After many years, and too many pranks, Yugen becomes convinced that Clod is tainted by the evil slowly infiltrating the Kingdom of Pag. Especially when Ada isn’t the only one Clod can bring to life.

Clod Makes A Friend is a bittersweet fairy tale for all ages from David J. Pedersen, author of the Angst series of fantasy novels. 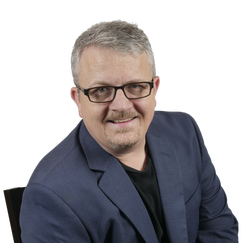 
David J. Pedersen is a native of Racine, WI who resides in his home town Kansas City, MO. He received a Bachelor of Arts degree in Philosophy from the University of Wisconsin – Madison. He has worked in sales, management, retail, video and film production, and IT. David has run 2 marathons, climbed several 14,000 foot mountains and marched in Thee University of Wisconsin Marching Band and written 4 fantasy novels. He is a geek and a fanboy that enjoys carousing, picking on his wife and kids, playing video games, and slowly muddling through his next novel.

a Rafflecopter giveaway
Posted by Two Points of Interest at 10:49 AM