High School senior, Morgan Taylor-Jackson, can't wait to attend UCLA and leave her old life behind.  Her parents constantly bicker over their divorce. Morgan is known as the nerdy girl who hasn't been kissed yet. Her life turns upside down when she gets bitten by a small child and she is taken to the hospital. Upon returning home, she realizes that her body is going through a transformation but she isn't sure what to do.

Van Xander is descendant of Van Helsing. He believes all vampires should be destroyed even ones who abstain from human blood, who call themselves, Puritans. When Van is sent to investigate a local coven, Morgan becomes his prime target after a string of murders occur. While Van pretends to be interested in her, he notices that she isn't like the other vampires. Will Morgan become a full-fledged bloodthirsty vampire? Will Van be able to put aside his distaste for vampires and help Morgan?

The novel read like your average teenage vampire romance novel. It was packed with the basic predictable teenage drama along with a few twists. I found the book to be a fun and enjoyable read.  Even though, some parts were a bit over the top. For example, the dynamics between Van and his sister, Cassandra didn't feel like "normal" brother and sister interaction, at times.  I enjoyed the fact that the author incorporates popular vampire ideas, such as their weakness to silver. I like that she also included aspects, such as Puritans and groups of people who both wanted to kill and "help" the vampire race. I look forward to reading the book in the series.

I fell in love with the slayer sent to destroy me.

Morgan Taylor-Jackson can't wait for high school to end. In six months she leaves for UCLA and says goodbye to La Jolla, California and her parents' messy divorce. But when Morgan is bitten by a four-year-old boy, she becomes infected with a mysterious condition. Fever, insomnia, and a new bustline are only the beginning; Morgan morphs from nerd to bombshell.

As far as Van Xander is concerned, all vampires are evil, even the ones who reject human sacrifice and call themselves Puritans. When Helsing Incorporated sends Van to La Jolla to investigate the local coven, Morgan is his prime target. Pretending to be interested in her, Van asks Morgan out and puts her through a series of tests to determine her killer nature.

Morgan is thrilled to be dating a hot guy like Van and falls for him hard. As Van strings Morgan along, he grows increasingly guilty. Morgan is kind, compassionate, and a gooey romantic. Just as Van's mind begins to change, evil forces threaten everything. When prom night arrives, there are only two ways out of the ballroom: death or immortality. 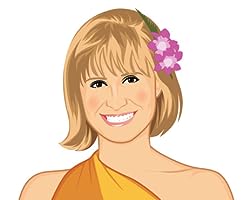 About Louise:
Louise Cypress believes in friendship, true love, and the everlasting power of books. She has never met a vampire, but she has been to a Love Sucks concert on Valentine’s Day. Louise can often be found curled up with a romance novel on Saturday night, diet soda in hand, secretly wishing bustles were back in fashion. Louise lives in San Diego, California, where the beach is crowded and summer is immortal.