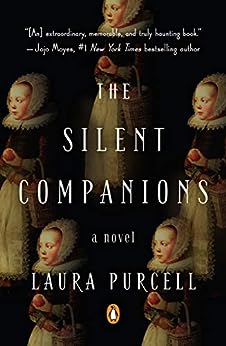 When Elise marries Rupert Bainbridge, she felt like her luck has finally changed. She would finally live a life of luxury instead of having to work in a match factory. Elise becomes pregnant weeks after her wedding and Rupert leaves to ready the family estate for her and their child. Elise receives news that her husband has passed and she must come to the country. There Elise finds the servants resentful of her and the locals to be hostile.

Elise only has her husband's awkward cousin, Sarah for company. The pair decide to take a tour of the house and come across a locked door. Behind the door is a painted wooden figure that looks like Elise. The servants are terrified of the figure but, Elise believes that it's just simple superstition. However, weird things are starting to happen and then Elise noticed that the eyes on the dolls are following her.

I have read the previous novel of the author and enjoyed this book too. The book had a special creepy and unnerving factor to it. However, I felt like there were few parts of the story I wish the author went into more detail on. For example, Hetta's relationship with the gypsy boy and Elise's history with her parents and brother. Some details were given but, most were hinted at. Overall, it was an interesting read and I would read other books by the author.
Posted by Two Points of Interest at 9:00 PM