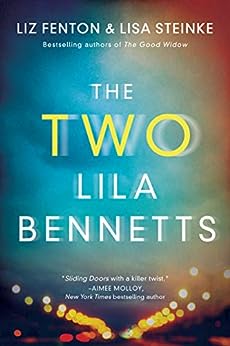 Lila Benntett has spent her life making one bad choice after another. Now, her bad decisions has caught up to her and split her life into two.

In one life, she is taken hostage by a stranger who knows intimate details about her life. She is trapped in a dank concrete cell and her kidnapper forces her to acknowledge what she has done or face the consequences. In her other alternate life, Lila manages to escape her captor but, someone is intent on destroying her life. They expose secrets that she has kept carefully guarded.

Everything that Lila holds dear to her is in jeopardy. She decides to take stock in all the secrets and lies she has told to decide who she has wronged. Will Lila be able to figure out the culprit before it's too late?

I thought the book had an interesting premise and it was interesting to see what happened in both realities. I can't say that I really care for Lila as a person. However, the reasoning behind Lila's kidnapping seems weak and that the person is desperate to punish someone. I felt like she was singled out in what was a series of unfortunate events. The book dragged on and the ending was expected. I might be opened to reading other books by the author but, I wouldn't go out of my way.
Posted by Two Points of Interest at 9:00 PM