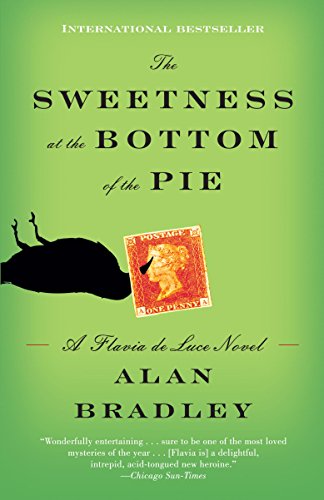 In summer of1950, Flavia de Luce is a young girl aspiring to be chemist with a passion for poison. She becomes entwined in a mystery when a dead bird is found on their doorstep with a stamp pinned through its beak. Hour later, Flavia discovers a man dying in their garden and watches as he takes his last breath. Flavia is excited that a murder occurs at Buckshaw as she soon becomes invested in solving the case.

This isn't usually the type of book I would pick for myself. However, it was given as a recommendation to me. It wasn't a bad book but, it wasn't a book that suit my tastes. I found the boisterous Flavia to be annoying and overwhelming at times. I didn't care for the writing style and I found myself having to reread several parts of the story too many times. I was a bit turned off with scenes of  the "Oriental" magic trick and found this to be in poor taste. Some readers might find this series enjoyable, I do not.
Posted by Two Points of Interest at 9:00 PM